Green Section: ECOLOGICAL CONNECTION OF SGS WITH ITS SURROUNDINGS

ECOLOGICAL CONNECTION OF SGS WITH ITS SURROUNDINGS

Our school is an Urban Nature Reserve affiliated to RESNATUR (Asociación Red Colombiana de Reservas Naturales de la Sociedad Civil). That means that the school commits itself to conserve and improve the habitat of the species living on the school property.  In 2015 we found 50 species of birds, 5 species of mammals and 150 different species of plants in the school.

Amount of species observed in 2015.

But most of these species depend on an area bigger than the school and move themselves to nearby natural places to find shelter, food or a couple to mate with.  In the surroundings of our school we find some important natural reserves that are part of the Principal Ecological Structure of Bogotá, like the Hills of Suba and La Conejera, Wetland La Conejera, Quebrada La Salitrosa and the Ecological Park Mirador de los Nevados.  Through the Bogotá River and the Forest Reserve Thomas van der Hammen we are actually connected to more wetlands, the native forest Las Mercedes and the Eastern Hills (Cerros Oreintales) of Bogotá.  For species to move from one natural place to another they need ecological corridors, mostly trees, streams and ground cover like grass or bush.

SGS and the nature reserves it is connected to.

Because of the ongoing urbanization the ecological corridors, and even some natural reserves, are more and more under threat of disappearing, being cut or damaged. The mayor threats in this moment are:

The consequence for the school is that our ecosystem will not have the width range of species, as they depend on this connectivity.  That is why our school has been involved for many years in helping to protect and conserve the natural areas around our school.  From 2006 to 2009, SGS students helped with the recovery of La Quebrada La Salitrosa, together with other schools, community action groups and foundations of Suba.  They planted trees and they monitored the growth of them.  In 2013 the Ecological Committee started, with a tree nursery, growing tree seedlings from the school forest.  In 2014 the first trees were donated to the Military School next door, as part of the project ‘Corredor Ecológico Cerros de Suba’, an initiative to assure the green connection of the school with the Hills of Suba. In 2015, SGS students planted 500 trees in the forest reserve Thomas van der Hammen, together with the participating schools of the event COP in Bogotá, organized by our school.  The planting activity in cooperation with the Botanical Garden of Bogotá connected the wetland La Conejera with the native forest Las Mercedes by trees.  In 2016, through monthly meetings with the schools of our zone about environmental educational projects, the environmental leaders of those schools have agreed doing joint projects in improving the ecological corridors.  Trees will be planted together and a project is in construction to implement tree nurseries in the schools of our zone.  Two SGS students of Primary and High School have made a project proposal for the tree nurseries and are competing to get a grant of Disney Youth for Change and Youth Service America this year.  We hope to be more en more connected to the green that surrounds us, so we can enjoy the nature in our school for many years more. 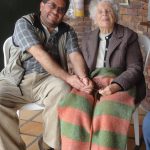